What to do when you trap a boundary trap 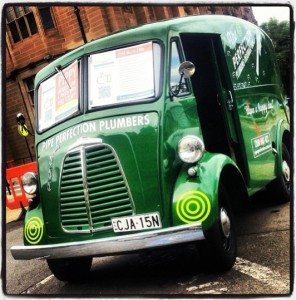 A beautiful landscaped garden in the Earlwood turned into an enemy of the waterways as Pipe Perfection Plumbers’ Darren Clancy found out. Pippy the J Van reports on what happens when gardens and plumbing don’t get along…

I like to think I’m the kind of van that appreciates the great outdoors. I am, after all, coloured green and keeping me running with an upgraded engine is probably better for the environment than buying a new van. But I remember once, when I was younger and I used to transport sports teams around in Victoria, getting bogged during one particularly rainy football season. The grass in the carpark was mush and it was the days before mudguards—you get the drift. Nature got the better of me that season.

Where was I? …Oh yes, the day nature got the better of the pipes. Darren and I trundled up to this lovely old one-storey house in Earlwood. It had been renovated in the past year and the owners had brought in a landscape gardener to do up the backyard. It was lovely, except the gardener had chopped down the boundary trap and then planted a tree in it. Because this was an old house, the sewer was made of clay rather than PVC. It looks a little bit like a terracotta pot, so maybe the gardener was confused? Anyway, over the course of the year, the tree grew bigger and its roots pushed into the drain through the little cracks in the clay, crushing the boundary trap and causing a blockage.

The boundary trap is the pipe that flows from your property to the main sewer line. It’s the last bit of pipe that plumbers are allowed to handle before you need to call in Sydney Water so it was important that Darren had access to it. Well, I don’t think I’ve seen Darren do so much work that wasn’t traditional plumbing! First he had to remove the tree, and then he rebuilt the boundary trap. When the boundary trap was finally accessible, he then removed a great big wad of baby wipes Mrs Earlwood had flushed while cleaning her baby, not realising that even ‘flushable’ wipes aren’t truly flushable.

Darren says it’s common to see boundary traps cut down or covered up because a lot of builders, landscapers and homeowners don’t know what they are (and, let’s face it, some of them are ugly). This Earlwood garden was able to infiltrate the boundary trap not only because the gardener planted a tree in it but also because the pipes were the old clay kind that gets cracks in it, letting the tree roots settle in the pipe. If you have an older house with clay pipes, it’s a matter of time before you’ll need to switch over to PVC. Installed correctly, PVC is watertight, which means there’s no chance of tree roots getting in. In this case, Darren replaced the boundary trap with PVC and advised Mr and Mrs Earlwood that they’ll need to look into replacing all the clay pipes with PVC at some point.

Does your garden pose a threat to your plumbing?