The curious incident of the leak in the bath-time 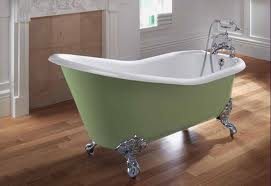 While plumbing isn’t a rat race kind of job, one of Pipe Perfection’s award-winning plumbers, Matt, was led through the pipes by a trail of destruction caused by former rodent residents to find the source of a leak. Pippy the J van has the story. 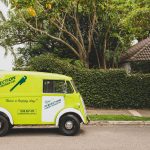 Being of a certain, ahem, vintage, I love Agatha Christie, so when a mystery job came up I was curious to find out what the ending would be. The first part was being driven to a suburb where one of our regular customers owned a property out there and the tenants were after some help with a leak from a questionable source. We pulled up to a two-storey house,  just seven years old. It was a leak from the air-conditioning vent we were there to investigate.

Water would leak into the garage from the air con vent every time the bath upstairs was emptied, which is a strange combination of events. Matt put on his plumber’s kit while I put on my thinking cap (I imagine it as a deerstalker one like Sherlock Holmes’). Matt was very careful and thorough with his investigation. He managed to get just enough access using the small gap in the air con in the garage to find out that there was nothing wrong with the air con at all. The leak was actually due to damaged pipes under the bath. It meant that every time the bath drained, it completely flooded the garage ceiling and would seep out through the air con vent.

Plumber to the rescue 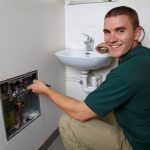 Now, Matt is one of Pipe Perfection’s award-winning plumbers and he is also a favourite with customers for a very good reason: he’s one of the neatest plumbers around. Matt didn’t need to remove any tiles or cut in, around or under the bath to fix the problem. Using that small air con gap in the garage, he removed all the damaged pipework and replaced it. When the source of the leak stopped, the excess water dried up. When you don’t need to dismantle a house, a job like this suddenly becomes less expensive because it takes less time to do and there’s no reassembly and clean up required. That’s the mystery to Matt’s popularity solved! 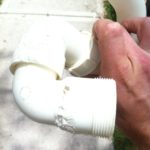 In a lot of mystery movies, the investigator usually gets to interrogate a suspect who then breaks down and confesses. The only broken thing we had was a chewed up pipe. Wait, what? Usually leaks spring from a crack in the pipe… There were bite marks on these damaged pipes. It turns out the tenants had recently evicted some rats from the garage roof. The rat exterminator had been good at his job, and the rats had moved out. But before they moved out they’d trashed the place—munching on pipes was just one of their parting gifts. The bath hadn’t been used since the rats moved out so the tenants didn’t link the problem to the rodents. And that’s the mystery of the curious incident in the bath-time solved!

Have pest problems ever affected your plumbing?