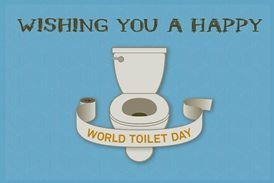 Happy World Toilet Day! Today is all about celebrating the humble water closet, along with the private ritual it is used for and recognising its very important part in making everyday life much easier. But what about those who don’t have a toilet? As we uncovered last week, over 2.5 billion people across the globe do not have access to safe, clean toilets. This means that they are also high risk to water-related diseases, including typhoid fever, cholera, trachoma and malaria.

Today is the day to spread the word about the global sanitation challenge. By simply joining the conversation on social media, you can make a difference in bringing safe and sustainable sanitary practices and resources accessible to those in need. We have been helping build awareness on:

Our top 10 most unusual facts about toilets:

Are we missing anything? Share your toilet fact with us in the comments below!