How plumbing changed the world 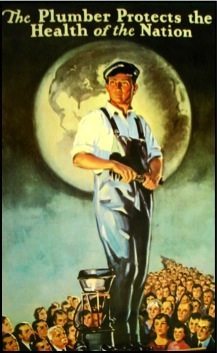 Today is World Plumbing Day and if you think that’s a funny thing to celebrate, imagine what the world would be like without it.

Actually, you don’t have to imagine. Even if you are privy to a privy, according to the United Nations, about 40% of the world’s population does not have access to adequate plumbing. This means they lack running water—which means a great deal of their day is spent fetching water from questionable sources—and flushing toilets are a distant dream, which leads to poor sanitation and a higher risk of catching water borne diseases. Not-for-profit organisations like Plumbers Without Borders and Engineers Without Borders help disaster-struck and underdeveloped areas with plumbing systems to help prevent disease from spreading when doctors are busy treating the wounded. So yes, while our customers in the inner west and eastern suburbs of Sydney all agree that plumbing is vital, on a global scale plumbing actually plays an important role in humanitarian efforts!

Celebrating the long history of plumbing

It didn’t seem so long ago that we had outhouses and night soil men (for they were always men—not a job for a lady!) trundling down our back lanes picking up the waste we expelled from our back sides, after which came indoor toilets, but the art of plumbing is actually more than 4,000 years old. Archaeologists have found latrines dating back to 2,500 BC at Knossos in Crete that appear to consist of a ‘flushing’ mechanism that would remove waste from the indoor toilet to a gutter at the outside of the house. The population of the Indus Valley, an area better known as the region around the Indian and Pakistani border today, went one step further and had a system that would flush the waste into an underground septic tank. If you want to go even further back, the aqueduct—a channel that would allow water to flow from its source to crops or a town—has its roots in ancient Egypt, but because of the spread of the Roman Empire, it wound up all over Europe and the Middle East. There’s an amusing scene in Life of Brian, a movie produced by the Monty Python team, where John Cleese’s Reg is leading his rebel force against the Romans in Jerusalem. He concludes one meeting with a rhetorical, “what have they ever done for us?” To which one of his minions replies: “The aqueduct.” Others follow with suggestions such that Reg has to end on a less than rhetorical note: “Apart from the sanitation, medicine, education, wine, public order, irrigation, roads, the fresh water system and public health, what have the Romans ever done for us?” If you feel like a laugh, you can watch the clip here:http://youtu.be/9foi342LXQE

What has plumbing ever done for you?