From Darling Harbour to Shell Harbour: The history of Sydney poo Part 1 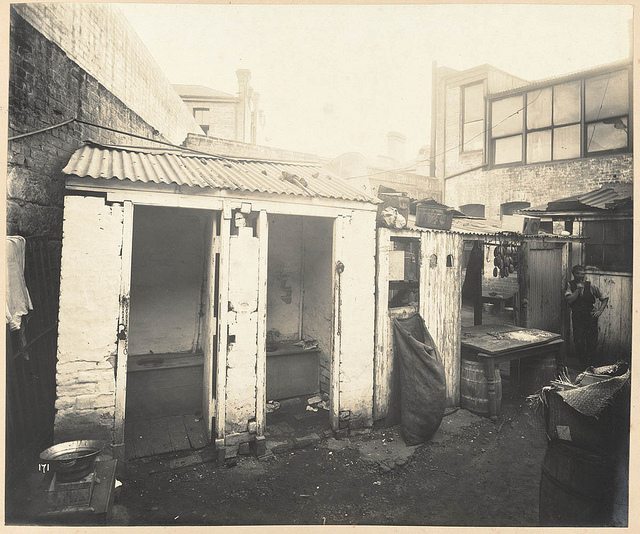 You wouldn’t think Sydney’s sewerage system during the fledgling years of our city’s days would make for a story of intrigue filled with overcoming disease, city wide protests and profiteering. Yet the history of Sydney poo has all the twists and turns of a John Grisham novel. Strap yourself in, folks. We’re about to wade into some murky history!

The 1850’s saw Sydney gain its first sewerage outfall. Where the sails of the Opera House now stand was an outfall pipe, spewing the leavings of the city’s population into our iconic harbour. Funny how you don’t find that depicted on any of the souvenir tea-towels and spoons! Out poured the waste of the city’s inhabitants right where today’s Opera House stands. By 1875, this single pipe had been replaced with half a dozen around the city and Darling Harbour, each spluttering with untreated waste into the water. The currents the Sydney city officials thought would work for them didn’t Three separate banks of stench-filled mud that danced back and forward with the tides at Fort Macquarie, Rushcutters Bay and Woolloomooloo. What left via the harbour well and truly came back to haunt with the changing tides! Fort Macquarie was also sporting a delightful cloud of effluvia that blew into the northern sections of the city on windy days. With the poo came the bugs, the flies and the cheerfully diseased rodent population. Yummy! Needless to say, Sydney Cove was awash with petitions, controversy and the unhappiest of brown waters for much of the 1870’s as a result. 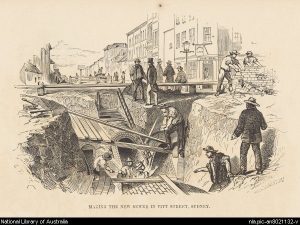 A change in direction

3,800 of Sydney’s residents had rallied and created a petition to end the disgusting city fog and rank smell circling the city. The Imperial Navy, tired of anchoring in human filth, wailed at the unhealthy situation and pleaded for a better solution. In 1875, both parties finally got the clout they needed to drive their point home. An outbreak of typhoid fever began on a docked naval vessel and rocked Sydney’s people.  The city and its inhabitants were making headlines for all the wrong reasons.  The much relied on immigration to Sydney was sinking beneath waves of poo that lapped at the shores. Newspapers around the world told the story of Sydney’s big stink. The people were sick, the navy was angry, and nobody wanted to come here anymore. It was time for action. Sydney’s main sewerage was slated to be diverted away from the harbour.

In true political form, everyone who could make a difference had a lot of strong opinions but no-one really wanted to tackle the waves of anger and of brown that were tormenting the city. Discussions began about building an outfall pipe to Ben Buckler and Bondi to pump sewerage to the sea. The hope was these points would be far enough away that perhaps the poo would finally get the hint and start sleeping with the fishes. Others were less convinced a bigger pipe, a different beach and more sea water were the answer. They instead fought for the building of a dedicated poo farm that included diverting outfall from Redfern, Surry Hills and Newtown at Botany Bay or Alexandria Canal. Like anything in the political arena however, the water-carriage debate was fevered and full of opinion. You could say it was a real “sh*t fight”. Indeed, the pages of the news throughout the 1880’s discussed the pros and cons of longer outfall pipes, diverting the waste to other waterways, and whether inland was the way to go. So much so, every day’s edition of the Herald newspaper in March 1880 featured some kind of story associated with Sydney’s growing poo problem. Can you imagine the Walkey’s that year?! Yet despite many of the inhabitants of Sydney crying foul since the mid 1870’s, real action to stem the growing tide smelly effluent junking up the harbour until almost the end of 1889. As politicians tangled with the brown downtown, next the engineers began a tussle over technology. This technological tussle almost swamped fair Sydney in a dark and dank problem- not once, but twice.

Stay tuned for the next instalment of the history of Sydney poo as we head for the farm and create a whole new kind of poo-nami on the political stage!