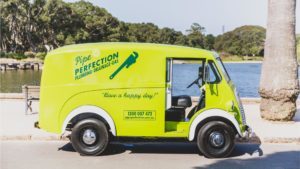 We are pleased to introduce you to Pippy! 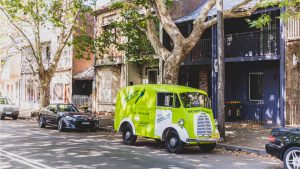 Pippy is a vintage 1954 Morris J van whose role is Head of Happiness at Pipe Perfection Plumbers (PPP). She putts around promoting PPP’s expertise in vintage plumbing bringing a smile to the faces of the residents of the inner west and eastern suburbs of Sydney.

What do you do at Pipe Perfection Plumbers?

I’m Head of Happiness, which means it’s my responsibility to make people smile. Luckily it’s not too hard. It’s amazing how seeing something a little different such as a vintage van like myself can cheer people up in the middle of Sydney traffic! It’s also my job to get the PPP plumbers to their next job quickly and safely.

How did you get the job? 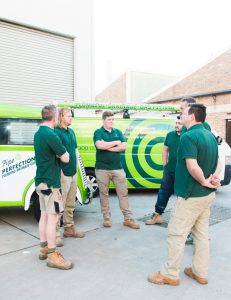 Well, Pipe Perfection Plumbers specialises in repairing pipes in heritage houses so Darren wanted a vintage plumber-mover that reflected the work they were doing. He saw a sister Morris J van at a job once. Her owner was a Newtown car photographer who was certainly not going to sell her, so Darren went looking for a Morris J and happened to find me.

What other jobs have you had?

In 1958 I belonged to Guest’s Bakery in Wangaratta (that’s in Victoria) and fell in love with the smell of fresh bread. Then when I was a bit older I became a party bus and mobile esky for the ‘Wang Rovers’, which is a football and netball club also in Wangaratta. That was kind of fun, celebrating and commiserating with the teams throughout the years, but I won’t describe the kinds of smells I had to put up with during that time. In 1998 I moved to Queensland with a Morris J enthusiast named Steve Hartnell, who took care of me until Darren tracked me down. I can tell you some jobs—especially the bathroom ones—can be still as stinky as a van full of sweaty athletes… but I’m used to it.

Favourite part of your role? 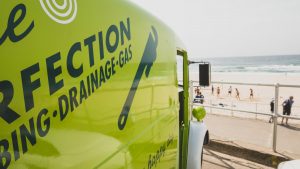 I like it when people come up to me to take a picture, it’s like they’ve asked for my autograph and it makes me feel like a celebrity. It doesn’t matter whether it’s in traffic, at a job or at a fair. It’s not very often girl of my age gets so much attention so I LOVE being photographed. I’m quite partial to Instagram and facebook filters to show both my vintage side and my shiny modern paint job. If you see me around, take a snap and share it on:

Any advice for other vintage vans?

Nostalgia is a powerful thing; if you’ve got it, flaunt it. Also, don’t be afraid to get ‘work’ done, a new paint job does wonders for the complexion. Vintage never goes out of style!

Do you think I look better with a vintage style filter or do you like it better when my colours ‘pop’?

← What to do about a local drain blockage: Part 3 Flushed away... or the makings of a sewer monster? →