TAKING THE PLUNGE – THE RIGHT WAY TO GET THINGS CLEAR 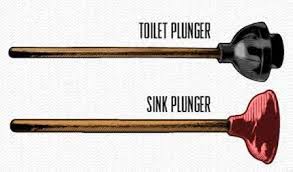 One day (and we hope you don’t) you may just have to unclog your toilet, sink or bath. It’s not the most delightful way to spend your time so here are our tips for making this slightly undesirable task a little easier.

To unclog your blocked toilet

Safety alert: Before anything, don’t use a plunger on a blockage that you have used clearing chemicals on; splashes and spills can happen and the chemicals are often corrosive.

Put down an old towel in case any of the aforementioned spills or splashes get in the way of clearing the blockage.

Cover the hole where the water drains with the plunger (see the image above for the best type of plunger to use), ensuring that there is some water surrounding the outside of the plunger. Make sure the plunger is standing up straight. This will ensure that the seal around the blockage is tight.

Push the plunger down (until it touches the drain) and then up (sharply) without breaking the suction seal.

Repeat this a few times and then pull up sharply one last time breaking the suction seal.

Fingers crossed, when you release the suction, the blockage should be dislodged, releasing the water.

If there’s no change repeat the above until the water begins to drain. Some really stubborn blockages such as paper may require a few attempts before they loosen and dislodge.

No luck? Time to call in the experts!

To unclog your blocked sink, bath or shower

Make sure you cover and seal the overflow drain with an old wet towel or cloth.

Then pop the plunger (see which is best to use above) over the drain, completely covering the drain opening.

Carry out the above up/down motions described to dislodge the blockage.

Again hair and food debris can be a little tricky to loosen so try a few times and if it doesn’t work give us as call!

It is recommended that you get your plunger from specialised plumbing supplies shops rather than hardware stores.

← From Darling Harbour to Shell Harbour: The history of Sydney poo – Part 2 5 ways to spruce up your bathroom without renovating →